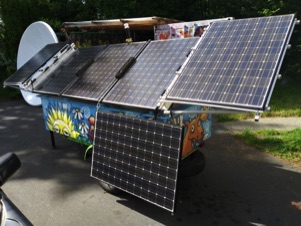 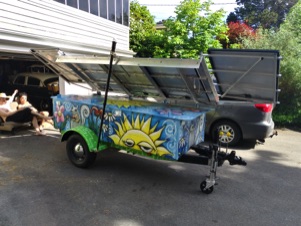 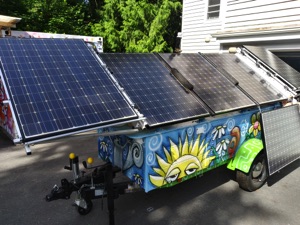 July 18 2020: started a YouTube Playlist about the solar trailer project

and made movies!   SOLAR TRAILER TOUR

Folding up the trailer and getting it ready to Tow Version 1: talking it through   Version 2 : with music!

July 17, 2020 Very successful 1st outing! I took the trailer up to old friend Johnny Rubato's place in Edmonds, about 15 miles north. The trailer drove fine, and without incident. First time I've really had it on the road since last summer's disastrous brake failure & subsequent flat tire. We RAN a LIVE BAND and remote radio station for 2 1/2 hours! That's a nine piece band with full PA, plus several laptops and mixers, etc. NOOOO Problem whatsoever... except the cops came and shut us down after we'd been on the air only a half an hour. :(

June 26, 2020 Lots more experiments: all outlets work. Ran vacuum cleaner and battery chargers, no problem. Driveway does not get great hours of sun. West side of driveway is sunlit by 9 am, but that's in shade by 4 pm. Refrigerator is generally draining batteries before 9 am...

June 18, 2020: Spent most mornings this week working on details:

cleaning up wiring by disconnecting, rerouting, turing, ziptieing, etc, installing covers on electrical boxes, waterproofing around removed brake lines, installing a prop for the 1 outboard panel. I was apprehensive about disconnecting, and was very cautious, but no sparks. AC disconnect off, photovoltaic breakers off, 2 DC circuit breakers off....

But very good news this am. I used the 16th and 17th to just charge batteries. No AC draw. Partly cloudy days, but the voltage eventually rose to 56 VDC by 7 pm on the 17th.

So I plugged in the garage refrigerator over night.

In the morning, the refrigerator was still running! The voltage had only dropped to 54.2 VDC ! THAT'S MORE LIKE IT!

Also: have a contract in a with 3D printing kid in Texas to make a yellow SUN globe for the top

After a lot of headscratching and some testing and some thinking...photovoltaic panel polarity reversed coming into charge controller. Who DID THAT? :)

Sort of. That was it for the sun.

Plugged in the garage refrigerator overnight, inverter shut down when battery charge got to 44 VDC sometime in the night.

Similar result next 2 nights. Is the battery charging properly? Is it working? This is less-than-expected performance....

Pouring rain all day, but we worked hard, got everything hooked up, finishing grounding, and....it worked!

One major challenge was updating firmware, using an SD card. 15 trips up & down the stairs, trying diffeent versions, formatting and directories. Grr.

Charge controller remained in "sleeping" mode, which we assumed was due to very low sunlight. (nope. see above...)

May 2020: quarantine! Big Push to finish and commission the trailer! about 6 wires to connect...

Fall/Winter/Spring/Summer 2018/19 design work on elctrical and solar components. Decision to use recycled Nissan leaf battery modules, and lots of work designing & building battery layout. The batteries were purchased on eBay from a vehicle recycler in Kansas, and arrived in several very heavy boxes. My first design would have mounted battery modules in pairs, on the bottom deck (about 7 inches deep) of the trailer. This design would have required about 57 cables, and added a lot of weight and break points. Impractical, but it would have looked nice, except no one spends much time looking at the inside of the trailer. :(  Eventually, the design and build has 42 battery modules stacked in two 21-module units. The battery terminals are connected with copper bus bars, and the batteries are stacked together using threaded rod, and held inside carefully measured and constructed plywood boxes. The batteries are arranged in groups of 6 (in parallel), and then 7 of those groups to create a battery array of nominally 56 volts at full charge. You can read more about this and get a drawing of the battery layout on the Trailer Technical  Info page.

After lots of research, Outback Systems gear was recommended to me by consultant and guru Jeremy Smithson of Puget Sound Solar, who helped arrange purchase. The Sanyo solar panels also came at a very nice price from Puget Sound Solar, which had recently removed them from a house and replaced with newer panels.

I built out the trailer using right-angle galvanized steel with perforated holes. Kind of adult-sized erector set stuff. My pal Jim Day made a number of helpfule suggestions along the way, like putting a curve on the roof, which turned out to be genius for shedding water. Aluminum stock came mostly from OnLine Metals, just across the Ballard Bridge.

The trailer came to me in January 2018 with a neat little "artists studio" attached. I bought the entire thing as a 1st semi-permanent studio for the community radio statio I helped start, KBFG 107.3 FM (and streaming on the web at kbfgseattle.org/listen ). The studio came off the trailer and was stationed at friend Jay's triangle plot down in Ballard near Mighty-O Donuts. So.. I had an empty flat trailer. 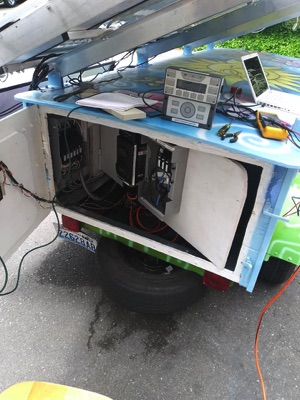